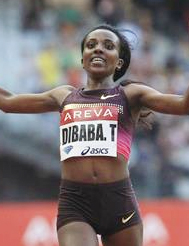 For good measure it was the seventh-fastest run ever over the distance.

A fast time was assured after the US pacemaker Gabriele Anderson took the leaders through 2000 m in 5:45.20. When she dropped out, Dibaba and her compatriots Gelete Burka and Almaz Ayana were a long way ahead of the rest of the field but the two-time Olympic 10,000 m champion went to the front in the third kilometre and the pace dropped slightly as 3000 m was reached in 8:40.53.

Ayana pushed the pace for another 700m and Dibaba, taking the lead with just over three laps remaining and despite visibly accelerating at the bell, could not get rid of the dogged Ayana until she kicked again with 300 metres to go.

Ayana, best known before Saturday as a steeplechaser, had the race of her life and took more than 27 seconds off her best when coming home as the runner up in 14:25.84. Read more