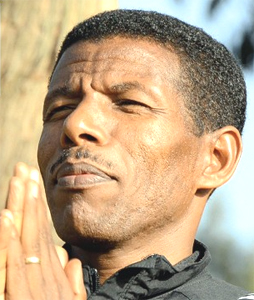 LAUSANNEÃ¢â‚¬â€œ Known as the Ã¢â‚¬Å“smiling assassinÃ¢â‚¬Â of running, EthiopiaÃ¢â‚¬â„¢sÃ‚Â Haile Gebreselassie, winner of two Olympic gold medals in 10,000 meters, (Atlanta 1996 and Sydney 2000), four-time World champion and owner of countless long distance records will be recognized with an AIPS Power of Sport Award in the Olympic City of Lausanne on Sunday.

Gebrselassie (or Geb as he is affectionately known to a special few) is a man beloved not only by his fellow Ethiopians but sports lovers the world over. The slight man from the Entoto Hills rates his 5,000m performance at the Weltklasse meeting in Zurich in 1995 as his Ã¢â‚¬Å“most memorable achievementÃ¢â‚¬Â. It was there he broke KenyaÃ¢â‚¬â„¢s Moses KiptanuiÃ¢â‚¬â„¢s record by almost 11 seconds with a time of 12 minutes 44.39 seconds.

But it is his performance off the track that is gaining more and more respect. His most recent role as mentor to 14 young athletes from disadvantaged backgrounds around the globe in theÃ‚Â G4S 4teenÃ‚Â progamme saw concrete success at the London 2012 Olympics with Colombian BMX rider, Mariana Pajon, winning her countryÃ¢â‚¬â„¢s only gold medal at the Games. Pajon became ColombiaÃ¢â‚¬â„¢s second Olympic Gold medallist in history.Ã‚Â Gebrselassie was one of the eight Olympic flagbearers at the Opening Ceremony of the London 2012 Olympic Games.

Gebreselassie, a long-term campaigner in the fight against AIDS, has worked closely with UNICEF to alleviate the suffering of the more than one million HIV/AIDS orphans in his homeland where the annual income is not much more than US $380.

Attracting more than 37,000 participants each year since its inception, the Great Ethiopian Run is the biggest road race in Africa and was the brainchild of Gebreselassie.Ã‚Â Ã¢â‚¬Å“We can end poverty by 2015Ã¢â‚¬ÂÃ‚Â is the race slogan and with the support of various NGOÃ¢â‚¬â„¢s and UN agencies, the Ã¢â‚¬Å“smiling assassinÃ¢â‚¬Â is well on his way to promoting running and raising money for charity in Ethiopia.Ã‚Â

Next stop will be the aptly-named Haile Gebrselassie Marathon, which will take place on Sunday, 20 October 2013 in Hawassa, Ethiopia.Ã‚Â

Meanwhile, the 40-year-old who says he could never give up running has been tipped by BritainÃ¢â‚¬â„¢s Telegraph newspaper as a future Presidential candidate.