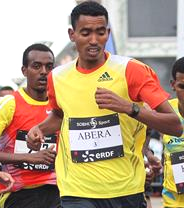 190 runners took part in the 10km elite race in front of a huge crowd of 15,000 spectators around the streets of Langueux, a village located in the west of France.

The outcome of the menÃ¢â‚¬â„¢s race remained undecided until the Hotel de Ville finish area. Nine runners were still in contention with 2km to go with the tallest of those, Tesfaye Abera from Ethiopia, leading with FranceÃ¢â‚¬â„¢s Abdellatif Meftah.

KenyaÃ¢â‚¬â„¢s Milton Rotich made an attempt to accelerate, but it only seemed to fuel AberaÃ¢â‚¬â„¢s motivation to remain in front. The Ethiopian did just that, and produced a thrilling sprint kick in the last section of the race.

With a winning time of 28:21, the 21-year-old smashed his previous personal best of 28:55 with the first significant race of his career, a few months after showing up on the international scene with his 14th place at the IAAF World Cross Country Championships.

Kiplagat finished second in 28:23, just one second ahead of EthiopiaÃ¢â‚¬â„¢s Tola Adera Tamirat. 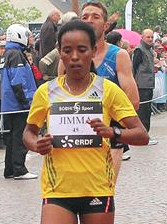 In the womenÃ¢â‚¬â„¢s race, pre-race favourite Christelle Daunay led for 9.5km before surrendering her lead in the final stages.

Ã¢â‚¬Å“I felt good and I wanted to find some rhythm, so I decided to run in front,Ã¢â‚¬Â said the French athlete who had some doubts about her current form after a couple of races run in abysmal conditions. In Langueux, the chilly temperature and violent bursts of wind didnÃ¢â‚¬â„¢t help.

The lead pack of women dropped away from the men after a few kilometres, and Daunay was clocked in 16:10 at half way. Ethiopians Fantu Eticha, Zeleke Etalemahu, Selam Abere and KenyaÃ¢â‚¬â„¢s Leonidah Mosop remained hidden in the pack and, much to DaunayÃ¢â‚¬â„¢s frustration, refused to share the leading duties.

At 8km Daunay still had Eticha and Etalemahu on her back. Ã¢â‚¬Å“I knew that they would pass me at one point and sprint away,Ã¢â‚¬Â she said afterwards. And she was right Ã¢â‚¬â€œ it happened with 500m to go.

Ã¢â‚¬Å“The time is satisfying, given that there were no men around to pace us,Ã¢â‚¬Â said Daunay. Ã¢â‚¬Å“The wind prevented us from running faster, but the atmosphere was great with all the public joined around the loop.Ã¢â‚¬Â

Pierre-Jean Vazel for the IAAF