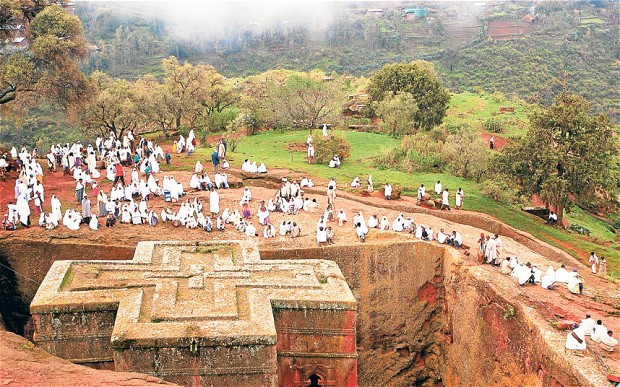 Alastair Sooke finds inspiration in the extraordinary churches of Ethiopia and scales a cliff to visit one of the oldest buildings in the world still in use Ã¢â‚¬â€œ which his grandfather restored in the Forties.

“Are you going to climb barefoot or wearing boots?”

In front of me was a wall of creamy-brown rock, mottled with footholds worn through centuries of use. My destination was situated nearly 60ft above my head: the threshold to the ancient monastery of Debra Damo, which occupies the summit of a rocky outcrop, entirely surrounded by cliffs, in the Tigray region of northern Ethiopia, a few miles south of the border with Eritrea. The only way to enter it is to haul yourself up a plaited-leather rope that hangs from a ledge adjoining the monasteryÃ¢â‚¬â„¢s gatehouse.

Thankfully, for outsiders like me, there is an additional strap that functions as a rudimentary safety harness, held taut by one or two monks above. After considering the question of my gung-ho guide, I unlaced my boots, in the hope that unshod feet would yield better grip, and began to heave. A few minutes later, my biceps burning, I clambered into the arms of the middle-aged monk who had been helping to pull me up. The hard part was behind me: the rest of the climb could be undertaken using steps. Read more