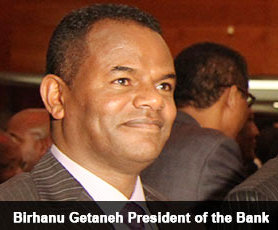 Addis Ababa, Ethiopia –Ã‚Â United Bank will be a billion birr bank in three years after selling four million shares, each worth 1,000 birr.

The bank announced this on its 8th ShareholdersÃ¢â‚¬â„¢ Extraordinary meeting held on Saturday June 15.

The proposal presented at this meeting to the shareholders indicated that the bank plans to increase its authorised capital as well as paid-up capital to one billion birr in three years time.

United Bank has also decided to open its doors to new potential shareholders in view of boosting its capacity.

The proposal states that existing shareholders can subscribe for the new shares in proportion to their current shareholdings. Subscription for the new shares shall however expire on the 30th of November 2013. Subscription then will be open to shareholders who want to subscribe beyond the proportion of their existing shares from the 1st of December up to the 31st.

In line with the bankÃ¢â‚¬â„¢s desire to open its doors to new shareholders, the proposal states that if the new shares are not fully subscribed for before the 1st day of January 2014, subscription will be open to new shareholders, and the management of the Bank, in consultation with the Board of Directors, will give priority to new potential shareholders. Those shareholders who want to subscribe in proportion to their number of shares or more than the proportion of their present shareholdings, may subscribe by paying an additional premium of five percent. Read more