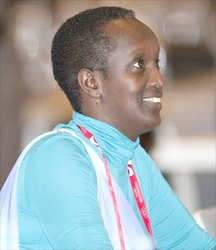 Burundi FA president Lydia Nsekera has been elected as the first woman to Fifa’s powerful executive committee in the governing body’s 109-year history.

Nsekera, 46, will serve a four-year term on the committee after winning the vote at the Fifa congress in Mauritius.

She collected 95 of the 203 votes ahead of Australian Moya Dodd and Sonia Bien-Aime, of Turks and Caicos Islands.

Nsekera said: “I will inspire women to believe they can lead and I will support women in member associations.”

Nsekera, who last year became the first woman to be co-opted to the executive committee, has been head of the Burundi FA since 2004 and was a member of Fifa’s organising committee for the 2008 and 2012 Olympic football tournaments.

A member of the International Olympic Committee, she is also on the independent governance committee set up in 2011 to tackle corruption within Fifa.

“In the executive committee, we work as a team, but personally I will carry on working in order to have more women as coaches in grassroots football.

“I will push for more women to be elected and ask parents to let their daughters play football.”

Dodd, who secured 70 votes, and Bien-Aime, who won 38, will both serve a one-year term as co-opted members.

And former Australia international DoddÃ‚Â says the election is a landmark moment for the game.

“It’s a historic day for football and a great day for women,” Dodd said.

“Football is the sport everybody loves; no-one should be excluded. And we should not only protect the game, but also fight against discrimination outside of football.”