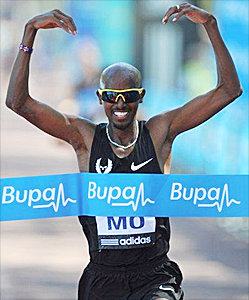 Farah was in imperious form as he raced away in the British capital from the domestic field on a looping course around central London and won by nearly a minute in 29:13.

His time was eight seconds quicker than he ran here last year, but some way adrift of the British record of 27:44 he set in 2010.

Nevertheless, it was a solid foundation, he said, for the challenges that lie ahead this summer.

The first will be a 10000m track race in Eugene against a field packed with the top Ethiopians and, later this summer, he will bid to repeat his Olympic 5000m and 10000m double at the IAAF World Championships in Moscow.

Ã¢â‚¬Å“It was most important to win the race today, I wasnÃ¢â‚¬â„¢t really looking for a time,Ã¢â‚¬Â said Farah.

Ã¢â‚¬Å“I always like to run there and this will be no different. I donÃ¢â‚¬â„¢t think anyoneÃ¢â‚¬â„¢s missing.Ã¢â‚¬Â Read more