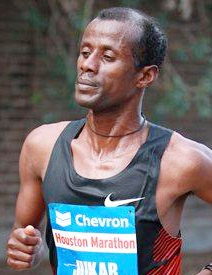 Once again athletes from across the planet will converge upon Ottawa for the Tamarack Ottawa Race Weekend on 25-26 May for the 10km and Marathon Ã¢â‚¬â€œ both of themÃ‚Â IAAF Silver Label Road RacesÃ‚Â Ã¢â‚¬â€œ and among them will be a large contingent of Ethiopians.

Half a dozen Ethiopians are part of a group trained in Addis Ababa by renowned coach Haji Adilo and managed by Hussein Makke, who is based in Pennsylvania. By the end of the weekend their presence will no doubt be felt.

Despite the nationÃ¢â‚¬â„¢s extraordinary long distance prowess, no Ethiopian man has ever won the Ottawa Marathon.

The 28-year-old Jufar is among a group of roughly 100 athletes who are part of HajiÃ¢â‚¬â„¢s training group in Addis. Several times a week they meet to run and to push each other to greater fitness. The competitiveness on display is conducive to world-class running, and all of their training is done at altitudes of 2500m and above. Read more