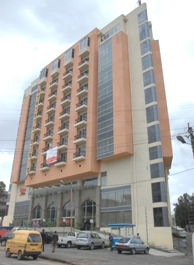 Addis Ababa, Ethiopia -Ã‚Â After five years of construction period with an investment cost of 720 million birr (around 39 million US dollars at the prevailing exchange rate), Capital Hotel and Spa, a swanky five star new hotel & spa, has officially opened in Addis Ababa, Ethiopia this morning.

Built on 19,383 square meters, the new hotel has begun operation today (May 10,2013) just in time to accommodate guests for the African UnionÃ¢â‚¬â„¢s (AU) 50th Anniversary Celebrations to be held later this month.

The new hotel is owned by an Ethiopian investor Yemane Gebreselassie, who is also the owner of Hosea Trading House PLC, one of the upper echelon companies engaged in Import Trade of Steel Products, Automotive Products, Machinery and Equipments and related after sales services as well as export of Agricultural commodities to the Global market.

ItÃ¢â‚¬â„¢s also constructing another section, expected to be finalized in the coming few months, Recreational Facilties complete with an outdoor swimming pool fitted with hi tech technology, as well as a Gymnasium, and a SPA facility to be staffed with expert therapists from China. The expansion project is also expected to add 300 guest rooms to the already existing ones.

Capital employees about 225 permanent staff, with an expectation to increase it to at least 270 once the expansion project is finished. Ulrike Braun Nasso the General Manager of the hotel, with a 25 years experience in the industry and has been in Ethiopia since 1996 said on the occasion that the hotelÃ¢â‚¬â„¢s Spa and recreational facilities are unique to the hotel in terms of its wide ranging services.

She said: “thisÃ‚Â  includes new relaxation therapies, with SPAs being split by gender for privacy as well as three floors dedicated to recreation.”

She surmised that the interest the hotel has gotten from would be customers is high because of a lot of requests for the upcoming AU summit, but also other upcoming conferences in Addis, with the hotel ready to meet the needs for customerÃ¢â‚¬â„¢s classicÃ‚Â  features such as Air conditioning parking facility, and flexibility and swiftness in communication with customers.

The hotel also plans to get share of the market segments booked by Ethiopian government offices and Authorities, Diplomatic Missions, International Organizations, associations and commercial companies.