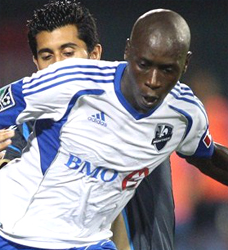 Two years after crossing the Atlantic, Hassoun CamaraÃ‚Â (France/Senegal) has carved out a reputation as one of the most reliable performers in Major League Soccer. His Montreal Impact side currently lie top of the Eastern Conference and they owe much of their success to a cast-iron defence, of which Camara is a vital member. “I feel very good here,” the Frenchman toldÃ‚Â FIFA.com. “I’ve found a good balance in my life.”

Camara packed his bags forÃ‚Â CanadaÃ‚Â in 2011, when Montreal were gearing themselves up to join Major League Soccer. In many ways it was a risky move, but the 27-year-old knew exactly what he was getting himself into. “I didn’t really know much about MLS at first, but I knew that it was a league on the up, especially given the arrivals of Thierry Henry and David Beckham,” he said. “I did a little research into the club and its structure, and I saw that it was very professional. After that, I didn’t hesitate. I don’t regret it at all now and I’ve seen more and more players come over here. I’d say that I came at the right time.”

Originally hailing from the suburbs of Paris, Camara signed his first professional contract with Marseille in 2006. He could hardly have hoped for a more prestigious club to begin his career, but competition for places proved fierce and he spent most of the next two years in the reserves. Preferring playing time, he opted for a switch to Bastia in Ligue 2, but he found himself facing another decision after his third season in Corsica ended in 2010. Out of contract, he was anxious to find a new destination. “There were some tentative offers that looked quite interesting. What I wanted was to be competitive and focused, so I didn’t really want to go to any of the more exotic leagues. I knew that MLS was a very well-organised league, with full, modern stadiums, and I decided to go for it 100 per cent.”

That willingness to commit himself has clearly paid off. Camara settled in quickly and has served Montreal with aplomb both in defence and midfield. He was voted the Impact’s best player during his first season and was selected in the team of the year for the second-tier NASL, an excellent start as the club prepared to make the step up to MLS. “My versatility has helped me,” explained Camara. “I can play in several positions and I have a better-than-average technique for a central defender.” Read more