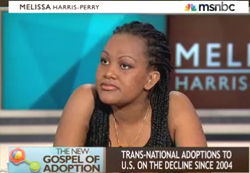 What would you do if you arrived in a foreign country ready to study on an educational exchange and only to discover you had been Ã¢â‚¬Å“adoptedÃ¢â‚¬Â by a family that thought you were an orphan?

It may sound like a nightmare, but it happened to Tarikuwa Lemma, who told her story on SundayÃ¢â‚¬â„¢sÃ‚Â Melissa Harris-Perry. Lemma came to the United States from Ethiopia for what she and her family thought was an educational exchange program when she was 13-years-old; after she arrived, she was told she had been adopted.

Once she learned what her adoption meant for her future, Lemma felt Ã¢â‚¬Å“a lot of grief and anger.Ã¢â‚¬Â

Ã¢â‚¬Å“I didnÃ¢â‚¬â„¢t want a new family because I had a family in Ethiopia,Ã¢â‚¬Â said Lemma, who will start her freshman year at college in the fall. The family that tried to adopt Lemma and her two younger sisters changed their names and even stopped them from speaking their native language. Read more

Visit NBCNews.com for breaking news, world news, and news about the economy