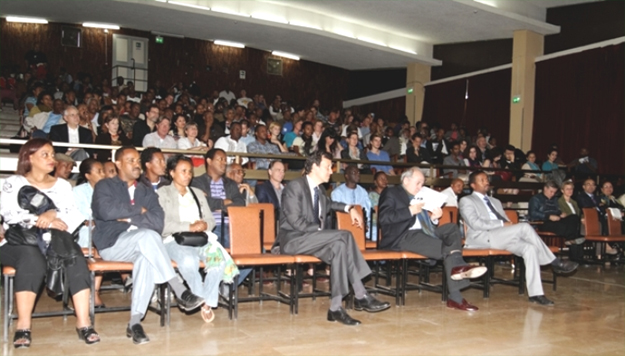 Addis Ababa, Ethiopia – The 7th edition of Addis International Film Festival is scheduled to kick off, from May 14th-19th with the theme Ã¢â‚¬Ëœbridging the gapÃ¢â‚¬â„¢.

Around 80 films from different countries that address issues like environment, migration, social change and disability will be screened during the week-long festival.

This film festival is organized by Initiative Africa.

According to Kebour Genna, Director of Initiative Africa, during this film festival the mainstream films will

not be screened rather films which challenge the popular social attitudes will be the main focus. He says that the festival is also working to be a platform for independent and alternative films.

Ã¢â‚¬Å“There are so many disparities in this world. The contrast is clearly visible where few percentages of people enjoy the privileges where others are suffering. This yearÃ¢â‚¬â„¢s film festival is dedicated to show that so we can have a better world for everyone,Ã¢â‚¬Â Kebour told journalists.

Some of the films, which will be screened this year, include Ã¢â‚¬ËœSuffering GrassesÃ¢â‚¬â„¢. This film is based on the saying when two elephants fight it is the grass that suffers.

The ongoing conflict in Syria left many thousands dead, abused and displaced.

Many civilians are hurt and are still hurting by the civil war that they are not part of.

This film depicts the politics behind the civil war and the dynamics of the response of the internationalÃ‚Â community and questions the integrity of NATO that gave fast response to Libya and not Syria.

Apart from that in this festival films that challenge the societal norms, culture and religion will be screened.

Apart from the films there will be a workshop for young aspiring filmmakers on how to make documentary films.

The films will be screened at the Addis Ã‚Â Ababa Youth Center, British Council, Alliance Ethio Francaise and the Italian Cultural Institute.