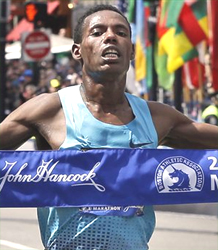 BOSTON – Lelisa Desisa of Ethiopia took the title in the 117th edition of the Boston Marathon on Monday, winning a three-way sprint down Boylston Street to finish in 2 hours, 10 minutes, 22 seconds.

In just his second race at the 26.2-mile distance, Desisa finished 5 seconds ahead of Kenya’s Micah Kogo to earn $150,000 and the traditional olive wreath. Gebregziabher Gebremariam of Ethiopia was another second behind him, in third place, with American Jason Hartmann matching his 2012 finish by coming in fourth.

Rita Jeptoo won the women’s race earlier for her second Boston victory. Jeptoo, who also won in 2006, finished in 2:26:25 for her first win in a major race since taking two years off after having a baby.

After a series of close finishes in the women’s race – five consecutive years with 3 or fewer seconds separating the top two – Jeptoo had a relatively comfortable 33-second lead over Meseret Hailu of Ethiopia, with defending champion Sharon Cherop of Kenya another 3 seconds back. American Shalane Flanagan, of nearby Marblehead, was fourth in the women’s division.Ã‚Â Read more