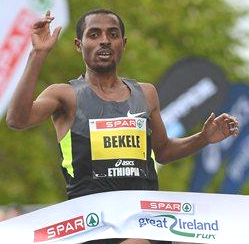 Bekele, considered by many as the greatest distance runner of all time, is the current World record-holder at 5000m and 10,000m. He took a break after the 2012 London Olympics, where he finished fourth in the 10,000m, and is now focusing on qualifying in the same event at the IAAF World Championships in Moscow in August.

He won the SPAR Great Ireland Run last year in a stunning course record time of 27:49. This year he will face a stern test as he defends his title against current World 10,000m champion and fellow Ethiopian Ibrahim Jeilan, who has a PB of 27:02.81 on the track and 28:02 on the roads.

He will also face AustraliaÃ¢â‚¬â„¢s Collis Birmingham who finished eighth at the recent IAAF World Cross Country Championships, MoroccoÃ¢â‚¬â„¢s Abderrahim Bouramdane who finished fourth in the Marathon at the 2011 World Championships, and nine-times European cross-country champion Sergiy Lebid of Ukraine.