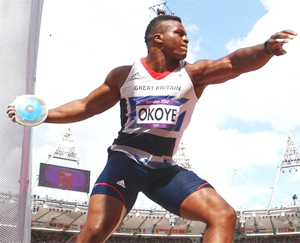 Britain’s top discus thrower Lawrence OkoyeÃ‚Â (his parents are from Nigeria) is set to embark on a career in American football after attracting the interest of some leading NFL teams.

The 21-year-old, who stands at 6ft 6in and weighs 21st, finished 12th in the Olympic discus final in London last summer.

A former junior rugby union player, Okoye only took up discus in 2010.

“Just wanted to confirm that I have decided that I want to play American Football in the NFL,”Ã‚Â he tweeted.

Okoye attended a recent trial in Atlanta, Georgia during a break from warm-weather discus training, and has a second trial next weekend in Dallas.

If the expected move to the NFL goes ahead, he will miss the 2013 athletics season, including the World Championships in Moscow in August. Read more