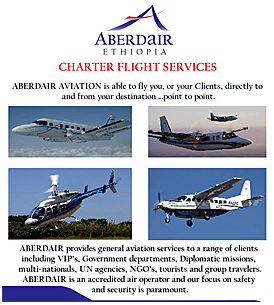 According to Frehiwot Tessema, general manager of the company, she was running a locally registered and owned aviation company that for some five yearsÃ‚Â  preferred to take the name of a Kenyan long-rooted aviation company, Aberdair.

The deal that was made before 2009 to use the name of the Kenyan carrier, however, was not meant to partner with the Kenyan side and open doors to access the local market since it is illegal for foreign ventures to join the aviation industry.

Since February 2013, Aquarius Aviation has become the official company name while the business deals and contracts remain as they were as usual with the Aberdair Kenya, Frehiwot told journalists at a press conference held at Harmony Hotel.

Aquarius currently operates in the aviation business having four, single- and two-engine aircraft. The aviation company provides chartered flight services for UN agencies, oil exploring companies, tourists and investors out of those. Tullow Oil has agreed to fly with Aquarius for a year in the exploration it is conducting in Ethiopia. New Age oil exploration company is the other that followed suit. The expensive yet well benefiting and untapped aviation business, gave Aquarius the chance to gross 49.6 million birr last year. In 2011 the revenues were some 35 million birr, registering 42.5 percent increase in that year.

The promising aviation business led Aquarius to budget some USD 1.5 million for the purchase of two Cesena caravan aircraft in the coming three years. Shiferaw Haji, finance and administration manager of the company, said that the lofty business is enabling Aquarius to have a five-year strategic plan, which is expected to be operational in the coming year.

Since September 2009, the aviation company has managed operations in the industry with Aberdair Kenya, the latter providing leased aircraft with maintenance and crew members. Captain Berhanu Demissie, who has years of experiences in the air force, is the only Ethiopian pilot who serves in the company as operations manager.

Currently, there are about 26 aviation companies registered here. According to Ethiopian Civil Aviation Authority, out of the 26, only six are currently operational.