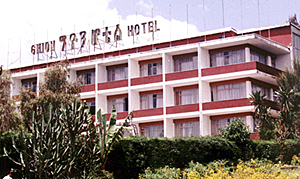 Addis Ababa, Ethiopia -Ã‚Â The Privatization and Public Enterprises Supervising Agency (PPESA), once again, has put Ghion Hotels Enterprise up for another bid as it failedÃ‚Â to attract potential buyers in its previous attempt.

The agency, this time, hopes that the bid will attract potential investors as it has revised the floor price of the hotel, previously set at 150 million dollars.

Ghion Hotel, one of the oldest and biggest public hotels in Addis Ababa, has been on the market many times, but failed to attract serious buyers. Even though local and foreign investors have managed to go all the way until the final stage to acquire the hotel, the deals have finally failed.

The bid is scheduled to be opened on April 19 and the document is now selling at the agency.

According to sources, Prince Aklile Berhan Makonnen will also be involved in the new bid.

Recently, the Ethiopian-born Prince basedÃ‚Â  in Italy, who tried to acquire the hotel in September 2010, had informed Capital that he has a vested interest in finalising the previous deal with the agency.

At the bid opening held in August last year, no one turned up or showedÃ‚Â  interest in acquiring the hotel, although about 15 companies had bought the bid document from the agency.

Ghion hotel is more popular for its extensive garden areas. According to the governmentÃ¢â‚¬â„¢s plan, investors interested in owning Ghion have to undertake massive expansion in accord with international hotel standards.

Ghion Hotel Enterprise was established in 1951 and used to operate a chain of eleven hotels in northern Ethiopia, and the National Hotel in Addis Ababa, that was sold to the Ethiopian Athletics Federation two years ago.