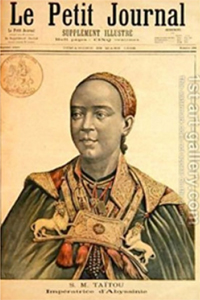 In February 1918, a popular French newspaper, “Le Petit,” announced the death of Empress Taitu Betul of Ethiopia, something that had never been done, publishing a photograph of an African woman on their front page. In the article, the newspaper admired and praised Taitu for her wisdom and profound contribution in the battle of Adowa. Scholar Wyld wrote, Ã¢â‚¬Å“on that brutal wintery day of February, so many onlookers have come to gather by the glass window of the only News stand in downtown Paris quietly staring at the photo on Empress Taitu Betul and bidding farewell to the wisest queen of mankind’s modern history. Ã¢â‚¬Â

Ethiopia was brought to the worldÃ¢â‚¬â„¢s attention in 1896 when an African country with no industry of weaponry and with mostly bare-footed soldiers, defeated Italy, a modern European country, at the battle of Adowa , Ayele Bekere, historian and lecturer at the University of Mekele said:

Ã¢â‚¬Å“Ã¢â‚¬Â¦The victory of Adowa is also celebrated throughout the world, for Adowa stands for human dignity, freedom and independence. As such its significance is universal and its story should be told repeatedly. Its narrative ought to be embraced by young and old, men and women. The Battle of Adowa should be listed as a World Heritage.Ã¢â‚¬Â

According to Donald Levine, Ã¢â‚¬Å“the Battle of Adowa qualifies as a historic event which represented the first time since the beginning of European imperial expansion that a non-white nation had defeated a European power.Ã¢â‚¬Â

Hailemelekot Agizew, historian, senior researcher, with the Authority for Research and Conservation of Cultural Heritage (ARCCH), says about the victory of Adowa and the significant role of the heroine and Iron Lady, Empress Taitu, the following:

Empress Taitu’s presence in the battle of Adowa is a clear testimony for the active role women played in the history of Ethiopia. This is a legacy that has been passed down to generations. Empress Taitu’s presence in the midst of the army was a moral boost that motivated them to die for the sovereignty of the nation. In war no one is sure what would be the out come of any war. Predecessors of Emperor Menelik, Emperor Tewodros and Emperor Yohannes both lost their lives in a battle. Menelik and Taitu do know all about this. They were not sure about the outcome of the war. Doing so, they went to the battle of Adowa to die for the nation. What makes the battle of Adowa different is the presence of an Empress in the war.Ã¢â‚¬Â

European strategy to carve up Africa into external and exclusive spheres of influence was halted by Emperor Menelik II and Empress Taitu Betul at the Battle of Adowa. The Europeans had no choice but to recognize this African (non European) power.

The decisive battle of Adwa is made clear that Africans will not bend to the oppression of European colonization, and Ã¢â‚¬ËœEthiopia shall stretch forth her hands unto God.Ã¢â‚¬â„¢ Taitu’s continued strength and warrior spirit helped to lead her countrymen to an overwhelming victory against the Italians.

The Empress had devised a plan to cut off the enemiesÃ¢â‚¬â„¢ water supply in the battle of Mekelle. Italy was ill prepared for this battle just as in previous battles. They had not studied the art of war, as had their African counterparts. They were not prepared to defeat Ethiopia. But Ethiopia was well prepared to defeat the Italian trespassers.

On January 19th, 1896, the last of the fort’s water was distributed. Eventually the Italian army could take no more. Italian general Baratier: ordered his men: “In the name of Italy’s majesty Umberto, cede the fort at Mekelle to the Negus of Abyssinia.” After their surrender, Taitu allowed them to draw water.

Taitu fulfilled her role as a valiant and passionate leader. Taitu gathered 10 to 12 thousand women and organized them to care for and aid the soldiers. Some gathered buckets of water to carry to the men in battle. Others stayed in camp to care for the wounded.

As the battle continued, Empress Taitu continued to pray to the Almighty as shells rained down around her. She would emerge as an unstoppable force. As she ran towards the enemy on foot, yelling to the men, “Courage, Victory is ours! Strike!Ã¢â‚¬Â She once again shed the stereotypical roles usually given to women and advanced as a lioness would for her prideÃ¢â‚¬â„¢s survival.

The Ethiopian forces broke the Italian center and the fighting intensified. Taitu, along with the women she had assembled, spent the rest of the time caring for the wounded. By noon the battle was over.

Eleven thousand casualties in all, 6,000 of which were Italian. In this land-sliding victory of Adowa, women had a gigantic role; the outstanding heroine Taitu was an architect of the battle with her wise, courageous and patriotic leadership along with her husband Emperor Menelik.

In Italy, as news reports poured in about the war, riots were unavoidable in the streets. New York Times headlines (March 7th 1896) read “Radicals Shout Menelik’s Praise… The greatest excitement prevails everywhere, reports of disorder came in from all directions, excited radical socialist and republican socialist members of the chamber of deputies were sent to Rome this evening amid crowds of people, crying, Viva Menelik! Long Live Menelik!”