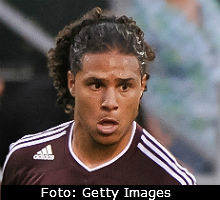 Bridgeview, IL (Sports Network) – The Chicago Fire acquired forward Quincy Amarikwa (USA/Ghana) from Toronto FC on Wednesday in exchange for a first round pick in the 2014 MLS Supplemental Draft.

Amarikwa was selected by the San Jose Earthquakes in 2009 and went to score one goal and record two assists in 24 appearances.

He spent three seasons with the Colorado Rapids and appeared in 31 games before signing with Toronto midway through last season.

“We are pleased to add Quincy to our roster,” said Fire president of soccer operations Javier Leon. “We were able to evaluate him during preseason to see how well he fits into our system. He’s a talented player and will strengthen our squad as we begin the 2013 season.”

During his time with TFC, Amarikwa netted two goals with one assist in 14 matches for the Reds.