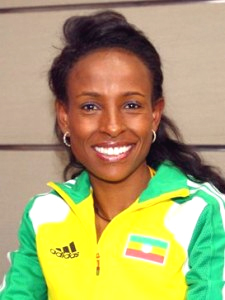 Mo FarahÃ‚Â set a British record as he outsprinted Ethiopia’s Gebre-Egziabher Gebremariam to win the race.

The double Olympic champion formed a breakaway duo with Gebremariam and they held a ten-second lead over the chasing pack at the halfway stage.

Farah ensured the race came down to a sprint finish and utilised his track speed to edge the former world cross country champion.

Farah recently announced thatÃ‚Â he would run half of the London marathon in AprilÃ‚Â as a tool for developing his speed ahead of the track season.

The run was not his fastest over the 13.2 mile distance, however, as he ran a time of 60 minutes 23 seconds in New York in 2011 but that time cannot count as a record because of the course’s gradient.

Scott Overall was the second Briton home in seventh, while Helen Clitheroe finished fourth in the women’s race – won by Ethiopia’s Meseret Defar.