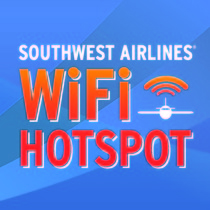 Southwest Airlines (NYSE: LUV) announced today that movies on demand are now available on allÃ‚Â WiFi-equippedÃ‚Â Southwest aircraft for only $5 per movie, per device.Ã‚Â  The airline also announced an upgrade to their television package. In 2012, Southwest became the only airline in the world to stream live television directly to CustomersÃ¢â‚¬â„¢ personal devices.Ã‚Â  Now, in addition to eight channels of live news and sports, Customers can also select on-demand episodes of popular television shows.Ã‚Â  The upgraded TV package is $5 a day, per device on WiFi-enabled planes.

The majority of Southwest Customers now have access to WiFi, movies on demand, and the upgraded television offering. Ã‚Â As of February 6, all Southwest Boeing 737-700 and 737-800 aircraft were equipped with Row 44 satellite technology that enables these entertainment offerings/services.Ã‚Â  This milestone represents nearly 75 percent of all Southwest aircraft, which completes the retrofit installations. Moving forward, all new deliveries and AirTran conversions will enter service with Row 44 technology installed.

WiFi service can be purchased for $8 a day, per device including stops and connections.Ã‚Â  Customers do not need to purchase WiFi in order to access movies or TV.

Accessing the Internet, or watching movies and television is simple.Ã‚Â  Customers use their WiFi-enabled device onboard any Boeing 737-700 or 737-800 aircraft, connect to Ã¢â‚¬Å“southwestwifi,Ã¢â‚¬Â and launch their browser to be directed to the inflight entertainment portal.Ã‚Â  From the portal, Customers are able to select WiFi, movies, or television.Ã‚Â  The portal also provides free access to a flight tracker, shopping, and games.Ã‚Â  With Row 44 satellite technology, connectivity continues to work over bodies of water so Customers remain connected all day, no matter where they travel.Ã‚Â  ThisvideoÃ‚Â highlights the Inflight connectivity experience.

For more information and visuals about using WiFi, movies, or television onboard, please visit the WiFi media kit on SWAmedia.

In its 42nd year of service, Dallas-based Southwest AirlinesÃ‚Â (NYSE: LUV)continues to differentiate itself from other carriers with exemplary Customer Service delivered by nearly 46,000 Employees to more than 100 million Customers annually.Ã‚Â  Southwest is the nationÃ¢â‚¬â„¢s largest carrier in terms of originating passengers boarded, and including wholly-owned subsidiary, AirTran Airways, operates the largest fleet of Boeing aircraft in the world to serve 97 destinations in 41 states, the District of Columbia, the Commonwealth of Puerto Rico, and six near-international countries. Southwest is one of the most honored airlines in the world, known for its commitment to the triple bottom line of Performance, People and Planet.Ã‚Â  To read about how Southwest is doing its part to be a good corporate citizen, visitÃ‚Â southwest.com/citizenshipÃ‚Â to read the Southwest Airlines One ReportÃ¢â€žÂ¢.

From its first flights on June 18, 1971, Southwest Airlines launched an era of unprecedented affordability in air travel quantified by the U.S. Department of Transportation as Ã¢â‚¬Å“The Southwest Effect,Ã¢â‚¬Â a lowering of fares and increase in passenger traffic wherever the carrier serves. Ã‚Â On every flight, Southwest offers Customers the first two pieces of checked luggage (weight and size limitations apply) and all ticket changes without additional fees (fare difference may apply). SouthwestÃ¢â‚¬â„¢s all Boeing fleet consistently offers leather seating and the comfort of full-size cabins, many of which are equipped with satellite-based WiFi connectivity and a new, eco-friendly cabin interior. Ã‚Â With 40 consecutive years of profitability, the People of Southwest operate more than 3,100 flights a day and serve communities around 78 airports in SouthwestÃ¢â‚¬â„¢s network of domestic destinations.Ã‚Â  Southwest AirlinesÃ¢â‚¬â„¢ frequent flights and low fares are available only atÃ‚Â southwest.com.