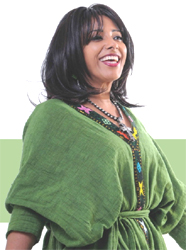 At the outset of her amazing music career, Netsanet Melesse released her debut album Ã¢â‚¬Å“Yelal DojuÃ¢â‚¬Â in 1983, which became an instant hit throughout Ethiopia. Her simple and alluring look on her single video, seen on the black and white screens of everyoneÃ¢â‚¬â„¢s living room TV made the album even more popular. No one ever doubted the singerÃ¢â‚¬â„¢s talent from then on, as it was not even eclipsed by her shy personality.

Netsanet MelesseÃ¢â‚¬â„¢s musical gifts became apparent at an early age as she started singing English songs that were popular at the time. The singer grew up in a very religious family and was even a part of a church choir as a child and also sang at charity events at times. Inspired by Western music moguls like Whitney Houston, Madonna and Aretha Franklin, NetsanetÃ¢â‚¬â„¢s talents started becoming evident in the gospel songs she used to sing at Estifanos Church.

Netsanet looks into the distance as she recalls the first day that determined her life as a musician. The singerÃ¢â‚¬â„¢s older sister, who was a French program producer at a radio station called Ã¢â‚¬Å“Beserate WengelÃ¢â‚¬Â at the time, persuaded her to sing on Tadesse MulunehÃ¢â‚¬â„¢s Sunday show. Thinking that giving it a shot wouldnÃ¢â‚¬â„¢t hurt, the singer took a blind leap of faith, desperately hoping that listeners would like her. She had no clue that as she opened the microphone that day, she would also be opening the door to fame. It didnÃ¢â‚¬â„¢t take long for other musicians to get in touch with her after she performed songs in English, Sudanese and Hindi on the radio show. Walias Band approached her with a request to perform with them at the Hilton hotel and she ended up having shows every week of the day except for Mondays. Ã¢â‚¬Å“MalaikaÃ¢â‚¬Â, the Grammy Award-winning South African singer Miriam MakebaÃ¢â‚¬â„¢s track was among the list of songs that Netsanet entertained her audience with six days a week along with songs like the ManhattanÃ¢â‚¬â„¢s Ã¢â‚¬Å“LetÃ¢â‚¬â„¢s just kiss and say goodbyeÃ¢â‚¬Â and the popular Sudanese track Ã¢â‚¬Å“SebertaÃ¢â‚¬Â.

Following this, Netsanet and her family decided a move was in order, and since then, she has been residing in Toronto with her 10 year old son. In 2004, Netsanet delighted her fans with her album Ã¢â‚¬Å“FertunaÃ¢â‚¬Â which was highly praised for its genuine lyrics and tunes. After 10 solid years, the singer made a comeback once again with a beautiful track titled Ã¢â‚¬Å“Bye ByeÃ¢â‚¬Â. The singer surprised her fans showing of her newly slimmed down body in the music video.

It’s been a long and tangled road for Netsanet’s stunning and intriguing new album Ã¢â‚¬Å“LibenÃ¢â‚¬Â, as it was challenging for her to find melodies she can relate to. But over the course of three years the album has been in the making, through business struggles and life changes, she has maintained a clear sense of her musical vision-and returned with a collection of songs that reconfirms her place as one of the finest singers of her generation. With music arrangers like Abiy Arka, and Sami Solomon, her new album boasts a collection of beautiful tracks featuring upcoming artists. One such song, Ã¢â‚¬Å“KeremelayeÃ¢â‚¬Â sees Netsanet performing with an aspiring musician by the name Tokichaw.

But in the midst of all the fame and glamour, the singer still makes time to keep in touch with her spiritual side as she has recently released a gospel album.

The singer has recently signed up with Adika Communication and Events, a company that manages and promotes Ethiopian artists, alongside organizing major events. With a calm and mellow voice that speaks of dazzling romance and emotions, NetsanetÃ¢â‚¬â„¢s new works, soon to be dropped in the Ethiopian market via Adika Communication and Events, project her ever great flair as an Ethiopian musician. From all the twists and turns of becoming a musician, Netsanet says she has grown to be an even more experienced singer with intense talents.