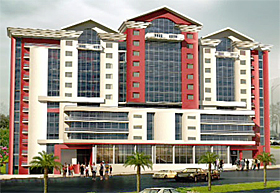 The Tigat Shopping Centre will be a multi-purpose building, including a 90-bedroom hotel in one wing.

The two companies will sign the contract at Hilton Hotel on Monday, February 4, 2013.

The building, named Tigat Shopping Centre, will occupy a 2,100sqm plot next to Axum Hotel, located on Haile Gebreselassie Street. It will be a mixed-use building, hosting shops, offices and a four star 90-bedroom hotel.

The total cost for the centreÃ¢â‚¬â„¢s construction, of which Rama will only handle structural works, currently stands at 233 million Br.

Tigat Shopping Centre belongs to shareholders of the company by the same name, which was set up nine years ago. Realising that the area where their shops were located was designated as a development area, six people came up with the idea of developing the land themselves.

They brought in an additional 10 people and formed the company with a capital of 9.6 million Br, according to Yelebe Molla, board chairman of Tigat, who has previously worked at both the Development Bank of Ethiopia (DBE) and the Commercial Bank of Ethiopia (CBE).

Tigat then entered into a joint venture (JV) agreement with HC&MD, whereby the latter would manage the project, including handling the design, building and sale of the space, on a profit sharing basis, in October 2011.