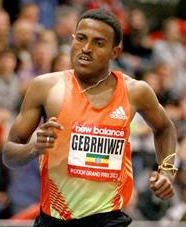 The most impressive mark came right at the end of the evening in a thrilling men’s 3000m race.Ã‚Â Ethiopian teenager Hagos Gebrhiwet matched strides with US Olympic Games 10,000m silver medallist Galen Rupp through the first 2000 metres before boldly moving into the lead.

The 18 year-old, who finished 11th in the Olympic Games 5000m in London, broke away from Rupp over the last kilometre with a powerful surge before hitting the tape in 7:32.87.

His mark was a meeting record, 2013 world-lead, and a new World junior record, just eclipsing the 7:32.89 run by Kenya’s Isiah Koech in Lievin last year. Close behind him, the crowd roared as Rupp clocked a personal best 7:33.67, just 1.24 seconds off of Bernard Lagat’s American record.

Three-time Olympic gold medallist Tirunesh Dibaba won the women’s Two Miles in what, for many people, may have been the most interesting race of the evening.

Dibaba, who is preparing for her marathon debut in London in April, wanted to break Ethiopian compatriot Meseret Defar’s meeting record of 9:10.50, but ended up running lap after lap alone. She won in a world-leading 9:13.17 but said she had been ready to run much faster.

“I thought the pacemaker would go faster than this,” said Dibaba. “But, actually, that didn’t happen. I could have run faster.”