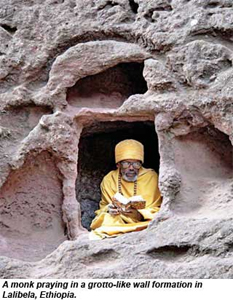 Ethiopia may not top the list of global heritage tourism hot spots, but with a history dating back to the second century B.C. it really should. Located in the Horn of Africa, this destination offers incredibly rich traditions, rugged natural scenery and colorful cultural experiences.

The Simien Mountains, within the national park, are situated in northern Ethiopia, with the tallest peak rising as high as 15,000 feet above sea level. Surprisingly, the rugged, high mountain range is dotted with villages linked by tracks.

Another of EthiopiaÃ¢â‚¬â„¢s superb natural spectacles and arguably one of AfricaÃ¢â‚¬â„¢s most spectacular natural attractions, Tisisat Falls, or Blue Nile Falls, can be visited in Ethiopia, while no fewer than 14 wildlife reserves have been demarcated in the country.