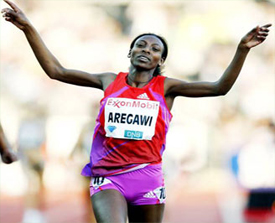 Abeba Aregawi, winner of the Diamond Race for 1500m in last yearÃ¢â‚¬â„¢s Samsung Diamond League, will run her first race as a Swedish citizen on February 21 when she competes at the XL Galan, anÃ‚Â IAAF Indoor PermitÃ‚Â meeting.

The former Ethiopian enjoyed victories in Rome, Oslo and Zurich last year. She dipped well inside four minutes when setting an Ethiopian record of 3:56.54 in Rome. Two other sub-four-minute performances came in Shanghai and Paris, although she was disappointed to finish fifth at the Olympic Games in London.

Her up-coming race on February 21 will be her second appearance at StockholmÃ¢â‚¬â„¢s Globe Arena. It was at the same venue in 2011 where she made her initial breakthrough, running 4:01.74 to lead the world indoor lists for that year.

Ã¢â‚¬Å“I am looking forward to compete in Stockholm and the Globe Arena,Ã¢â‚¬Â said the 22-year-old. Ã¢â‚¬Å“I had a very good race there last time and I was delighted by the support of the crowd.Ã¢â‚¬Â

This time round she may have one eye on the Swedish national records. The indoor mark of 4:07.74 was set 21 years ago by Maria Akraka, but there is a chance that Aregawi could break the outright Swedish record by running faster than Malin EwerlofÃ¢â‚¬â„¢s outdoor best of 4:05.49, set in 1997.

Sources:Ã‚Â Jon Mulkeen and organisers for the IAAF