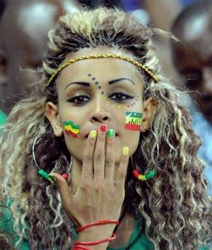 SINCE the beginning of the Afcon games, Ethiopian fans have created a riot of colour in their stylish green, yellow and red costumes – not to mention their tastefully painted faces.

Worku Geyres (27), a tailor and designer of traditional Ethiopian wedding gowns, who ironically predicted a 4-0 score in favour of the Black Lions before their crashing loss, is one of the side’s keenest fans.

“We have waited for 31 years for our country to return to this tournament,” he says.

Most of his countrymen Sunday World interviewed before they departed for Mbombela Stadium told a story of a committed group of fans who support their team through thick and thin.

“We love our country very much. We follow our team wherever they play. The fact that most of the players come from big teams such as Saint George’s and Coffee has helped, ‘cos the squad is made up of players who know each other well,” says Geyres.

“If we don’t get to the next stage, we hope Bafana Bafana will and we will support them because South Africa is our host country,” he adds.

Tigist Lemma runs a popular coffee shop in Joburg Mall in the city centre and shares the same patriotic fervour as her countrymen and women on Friday. By late afternoon her shop was already empty because most of her customers were on their way to Mpumalanga.

“Our first game against Zambia was particularly special because we came out in large numbers – about 31 000 – from all the country’s city centres as well as from home and abroad. 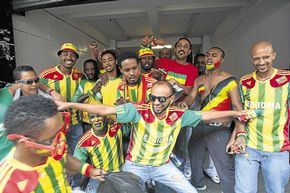 We had 62 buses and more than 50 taxis, not to mention private vehicles that took supporters to the stadium,” she says proudly.

“Ethiopians are friendly and hospitable people who enjoy sharing their coffee ceremonies and other cultural practices with outsiders. We’re also famous for our champion runners, but soccer is a big part of our lives. We are very passionate.”

Inside David Goraga’s record bar, the vibrant music of Ras Jalud blares from the loud speakers. The patriotic lyrics of Ethiopia’s leading reggae artist sing Walias’s praises and urge all Ethiopians to rally around the national team.

But after Friday night’s ignoble defeat in the hands of the West Africans’ enterprising sharpshooter Alain Traore and tricky playmaker Jonathan Pitroipa, only Toots and the Maytals soul-drenched lament, Careless Ethiopians, will make sense when they admonish the careless Ethiopians for losing their way and consequently breaking the hearts of such beautiful, loyal and passionate supporters.