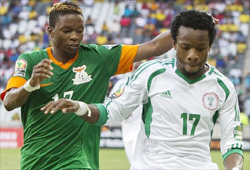 Zambia goalkeeper Kennedy Mweene scored a late penalty to rescue a point for the Africa Cup of Nations champions.

Mweene sent his spot-kick into the top corner after Ogenyi Onanzi was harshly ruled to have fouled Emmanuel Mayuka.

Earlier Nigeria had failed with a penalty when John Obi Mikel hit the post with the score at 0-0.

Emmanuel Emenike cut inside his man and slotted in to open the scoring for the Super Eagles but they were denied by a controversial penalty decision.

And it was another big slice of fortune for Zambia, who looked well short of the form that shocked the continent last year and took them all the way to the title.

Zambia and Nigeria had each won five of the 16 previous their head-to-heads, with six matches drawn, and it soon became obvious that they were going to be evenly matched.

A woeful pitch contributed to a lack of precise passing but it could not be blamed entirely as both sides struggled to produce any cohesion or consistency.

Zambia were first to threaten, Rainford Kalaba sending a drive just over the angle of the post and bar, and it seemed like the defending champions were in the mood to ignite their bid to retain the title.