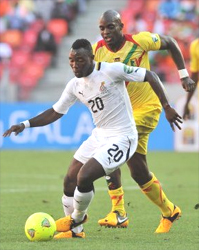 Ghana kept alive their hopes at the 2013 Orange Africa Cup of Nations with a lone goal victory over Mali in their Group B clash on Thursday at the Nelson Mandela Bay Stadium in Port Elizabeth.

Midfielder Mubarak Wakaso scored the only goal of the match in the first half from the spot to hand the Ghanaians their first win at the tournament.
The Black Stars needed nothing short of victory to boost their chances and they did just that against a Malian team that rarely threatened the Ghana defence throughout the encounter.
As early as the seventh minute, Les Aigles were gifted an indirect free-kick at the edge of the penalty area after Ghana goalie Abdul Fatau Dauda handled the ball out of his area. But Keita curled wide the resultant free-kick to the relief of their opponents.
On 13 minutes, it was the turn of Ghana and captain Asamoah Gyan led by example with a header from a Wakaso cross that bounced off a Malian defender, in a clear signal of their readiness to carry the maximum points.
The action was centred in the midfield with the Malian midfield trio of Samba Diakite, Mohamed Sissoko and Keita having the upperhand over their Ghanaian counterparts. Despite their control of the middle, they had nothing to show upfront as they barely made any realistic threat upfront.
On 35 minutes, Ghana earned a penalty after Emmanuel Agyemang Badu was fouled in the vital area by his marker. The move was initiated by Kwadwo Asamoah, found Gyan who squared Badu through before the latter was felled by the Malian defender.
The resultant spot kick was converted by Wakaso who sent Mali goalie Mamadou Sammsa the wrong way for what turned out to be the only goal of the match.
The second half was no different with Ghana resorting to short passes whilst Mali tried to force their way into the opponentÃ¢â‚¬â„¢s defence. Ghana coach, Kwasi Appiah brought on Christian Atsu, Derek Boateng and Solomon Asante for Wakaso, Asamoah and Albert Adomah respectively as they held on unto the slim margin.
Mali on their part also introduced the likes of Mahamadou Sammassa, Modibo Maiga and Samba Sow but their efforts fell short of handing them at least a point in the closely fought contest.
Ghana next play Niger on Sunday in Port Elizabeth whilst Mali travel to Durban to engage DR Congo.

Ã¢â‚¬Å“Tactically, the team was much disciplined and there was no loss of concentration. We still got a lot to offer and can do better in our next games.Ã¢â‚¬Â
Asamaoh Gyan (Ghana captain)
Ã¢â‚¬Å“Mali played a good game and it was a difficult game. We came with a winning mentality. We have four points, but we need more points to qualify. We will do our best in the next match to qualify to the next round.Ã¢â‚¬Â
Patrice Carteron (Head Coach, Mali)

Ã¢â‚¬Å“Ghana were better than us in the first half. In the second half, we tried to score but their defenders were good and prevented us from scoring. We have our last game and will try to qualify from it.Ã¢â‚¬Â