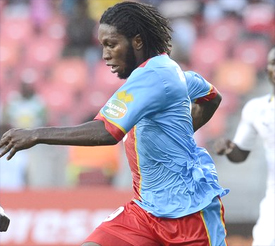 DR Congo came back from 2-0 down to deny Ghana victory in the first game of Group B at the Africa Cup of Nations.

Asamoah doubled Ghana’s lead when he head in at the far post but Tresor Mputu replied quickly for DR Congo, poking home from inside the box.

And DR Congo restored parity when Dieumerci Mbokani scored a penalty after being dragged down by his shirt.

It was a deserved point for DR Congo, whose build-up to the match had been marred by rumours that their coach Claude LeRoy had quit over a row about bonus money.

But the Frenchman was in place on the touchline to see his team make a bright start against the fancied Ghanaians.

Lomana Lua Lua came close to opening the scoring when his fierce drive from inside the box was brilliantly tipped against the bar by Fatau Dauda.

Shortly after, more incisive approach play from DR Congo saw prolific Anderlecht striker Dieumerci Mbokani twist his way to the byeline and knock the ball back to an unmarked Tresor Mputu, but he shot wildly high and wide.