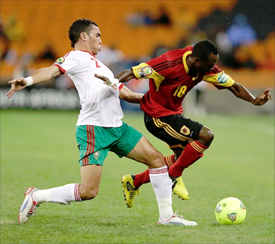 Johannesburg, South Africa – AngolaÃ‚Â andÃ‚Â MoroccoÃ‚Â drew 0-0 on Saturday evening to leave Group A of theÃ‚Â Africa Cup of NationsÃ‚Â all square after the first round of fixtures.

The first half started brightly with both goalkeepers being forced into making early saves, however the game quickly settled down into a scrappy midfield battle.

Angola were gifted a gilt-edged chance in the opening moments of the second period as Morocco goalkeeperÃ‚Â Nadir LamyaghriÃ‚Â spilled the ball into the path ofÃ‚Â Guilherme Afonso.

However, the substitute was only able to poke the ball wide, much to the frustration of his coach.

Angola pushed forward in search of a winner late on andÃ‚Â ManuchoÃ‚Â was narrowly off target with a diving header, but the game ended goalless.

Earlier in the day, South Africa and Cape Verde alsoÃ‚Â played out a 0-0 draw.