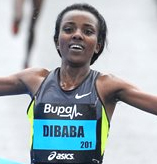 Ã‚Â³IÃ‚Â¹m looking forward to launching my 2013 season in one of my favorite cities,Ã‚Â² said Dibaba, one of the most-decorated female athletes in the history of the sport.Ã‚Â  The World Indoor Record for two miles, held by Meseret Defar, is 9:06.26.

Now 27, Dibaba won her first IAAF World Championships title when she was just 17. A familiar sight in Boston over the years, the Ethiopian superstar began a comeback from injury here last year that culminated in winning two Olympic gold medals Ã‚Â­ gold at 10,000 meters and bronze at 5000 meters Ã‚Â­ to add to the two gold medals she won in Beijing in 2008 and the bronze from 2004. The versatile distance star has also earned a total of eight senior World Championships titles on the track and in cross country, and has set three World Records, including two in Boston: In 2005, she broke the World Indoor Record at 5000 meters here, then came back to the Reggie Lewis Center two years later and broke it again. She currently owns the outdoor World Record at 5000 meters.

In 2011, his bronze medal run at the IAAF World Championships made Matthew Centrowitz the first US collegiate athlete ever to win a World Championships medal at 1500 meters. He followed up this breakthrough performance with a fourth-place finish in the 2012 London Olympic final, missing another bronze medal by just .04 seconds. Known for his deceptively long and well-timed finishing kick, Centrowitz won the 2011 NCAA 1500 meter title for the University of Oregon.

The 18th-annual meet is the first stop in USA Track & FieldÃ‚Â¹s Championship Series.Ã‚Â  It begins at 5 p.m. on Feb. 2 at the Reggie Lewis Track and Athletic Center at Roxbury Community College. Tickets and meet information can be found on-line at www.nbindoorgrandprix.com or by calling 1-877-849-8722.

New Balance, headquartered in Boston, MA has the following mission: Demonstrating responsible leadership, we build global brands that athletes are proud to wear, associates are proud to create and communities are proud to host.Ã‚Â  New Balance employs more than 4000 people around the globe, and inÃ‚Â 2011 reported worldwide sales of $2.04 billion. For more information please visit http://www.newbalance.com.