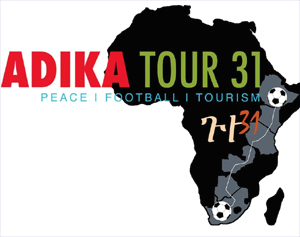 Addis Ababa, Ethiopia – Adika Communications and Events announced that the management team of Adika and its sister companies will be going on a tour show in support of the Ethiopian National Football Team. The Adika team comprised of 17 people will be traveling through five countries across Africa by car that will last 16 days.

Ã¢â‚¬Å“The idea is to support and promote our national team throughout the trip. Ethiopia qualifying for the African Cup of Nations after 31 years is really wonderful and as a company we want to do what we can to support and promote the team,Ã¢â‚¬Â said Ashenafi Zeleke, General Manager of Adika Communications and Events on Friday January 4, 2013. The tour themed Ã¢â‚¬Å“Adika Tour 31Ã¢â‚¬Â plans to not only promote the National Football Team but also encourage Africans to develop the culture of visiting African countries instead of visiting western countries. Ã¢â‚¬Å“One of the main goals of this tour is to let people see that it is also a really great idea to travel within the continent of Africa. You see many western foreigners travelling across Africa so why donÃ¢â‚¬â„¢t we also develop that culture?Ã¢â‚¬Â said Ashenafi.

The tour will cover Kenya, Tanzania, Zambia, Botswana and South Africa. The company stated that it has planned different activities in each country although it was not specified what they will be doing. Ã¢â‚¬Å“During this tour we also want to promote Ethiopia, we will be traveling with different documents to help us do that and we will make sure to pass different information while we are in each of the five countries,Ã¢â‚¬Â Ashenafi said.

Adika has not yet decided the date of the tour, but the General Manager stated that all the necessary steps have been taken to make sure that the tour will happen. Ã¢â‚¬Å“We actually planned a similar tour back in 2010 when the World Cup was held in South Africa but due to some problems we werenÃ¢â‚¬â„¢t able to move forward with it,Ã¢â‚¬Â said Ashenafi.

The company stated that the Ethiopian government as well as the governments of the five countries the team will be traveling to have been very supportive.