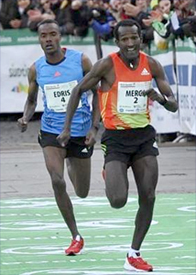 Merga won the Boclassic in 2010 when he beat Great Britain Mo Farah in a dramatic sprint for the line.

This year, Merga repeated his feat, duelling with his 18-year-old compatriot Muktar Edris, the 2012 World Junior Championships 5000m winner, all the way to the finish.

Merga, Edris, Lebid, Kipruto, La Rosa and American runner Scott Bauhs were together at the front through the second lap, going through in 7:35.Ã‚Â Read more