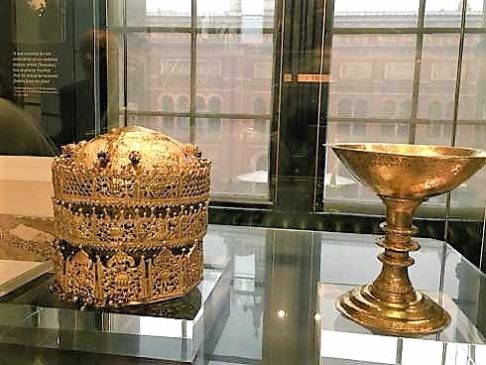 Addis Ababa, April 7, 2018 (FBC) – The Ethiopian government rejected today claims that it is negotiating with the Victoria and Albert Museum of the UK to bring the Meqdela treasures, looted 150 years ago, on long-term loan to the country.

On the contrary we have intensified our efforts for the restitution of all our treasures taken after the battle of Maqdala, Culture and Tourism Minister Hirut Woldemariam said.
Ethiopia lodged a formal restitution claim in 2007 for hundreds of important and beautiful manuscripts and artefacts being held by various British institutions, all plundered after the 1868 capture of Maqdala, the mountain capital of Emperor Tewodros II in what was then Abyssinia.

However, that request has been refused, according to the Guardian newspaper, which reported that the director of Victoria and Albert Museum Tristram Hunt said a compromise has been offered: “The speediest way, if Ethiopia wanted to have these items on display, is a long-term loan … that would be the easiest way to manage it.”

Responding to the “compromise”, the minister stated that neither the government nor the ministry requested bringing the Meqdela treasures on long-term loan basis from the museums.

She rejected the claim by Hunt that the loan proposal has been welcomed by the Ethiopian state and campaigners. Hirut said, the government is instead using every mechanism to bring the treasures permanently.

Hundreds of artifacts were plundered by British troops from Maqdala and the emperor’s treasury cleared with 15 elephants and 200 mules needed to transport them.

Campaigners have identified about a dozen UK institutions that own them, from the Victoria and Albert Museum in London to the Royal Library at Windsor Castle to a regimental museum in Halifax.

The minister insisted that Ethiopia will further strengthen its demands for the return of treasures from museums and libraries and individuals. There were no discussions about the treasure coming through loan as Ethiopia is the rightful owner of the treasures.

In related news, the ministry announced that the 200th birthday of Emperor Tewodros II will be commemorated from April 10 to 16 in Gondar, Debretabor and Addis Ababa.

According to the Minister, Emperor Tewodros has played significant role in trying to unite the country and modernizing the country as well as establishing and organizing libraries.

The commemoration program, which includes panel discussions and exhibitions, is prepared in collaboration with Amhara Culture and Tourism Bureau., according to ENA.