Ethiopians truly know the essence of celebrations. The country hosts locals and visitors from all over the world dipping them into one of its kind adventure and joyous celebrations known as Timket (baptism). People go outdoors in masses, dressed in their best and white traditional clothing to celebrate and worship.

Exclusive to Ethiopia, the colorful annual street festival is a three day event which starts from 18th of January and is celebrated until the 20th of January. The celebration is to commemorate Christ’s baptism. It dates back to the 16th century and involves laying long red carpets on streets, worshiping, feasting and procession. On the 19th of January people go out in masses to a place called jal meda for the rite of sprinkling water onto their forehead and water to symbolizing Christ’s baptism.

Throughout the entire festival and celebration unlike in most celebrations in the country, the streets are packed with so many pilgrims who come to re-enact the baptism of Jesus in the Jordan River; and take a dip in the waters which are considered holy. The festivity has also been associated with an opportunity where pilgrims meet their future significant other. People attend the carnival looking their best to meet future possible spouses. In ancient times, the day used to represent an important day for men to identify the women they want to marry from the large crowd.

The event is a sophisticated and spectacular traditional festival that shows great worship, unity, and romance at the same time as Jumia Travel observed. If you love street festivals and great culture, Timket is not to be missed. It’s a celebration that reveals the ancient culture and tradition of Ethiopia which continue to be passed on from generation to generation.

The massive delightful celebration begins on the 18th of January which is known as Ketera and is translated as the eve of Timket. The celebration involves taking out the Tabots, a model of the Arc of the Covenant from the churches where it’s preserved from the public access. The Arc will be carried by high priests who are also chosen for procession to carry the Tabots, and blesses the pilgrim’s with the holy water. The Tabots entirely covered in silk decorated clothing are placed on the heads of priests, who parade the streets slowly.

Outfitted in the stunning and sparkling white (habesha libise) traditional clothing, people march numerous streets following the models of the Ark of Covenant to pay their respects singing out loud using traditional instruments. Priests sprinkle the holy water on the large crowd in commemoration of Christ’s baptism while others get dipped into the pool while fully dressed to get baptized. 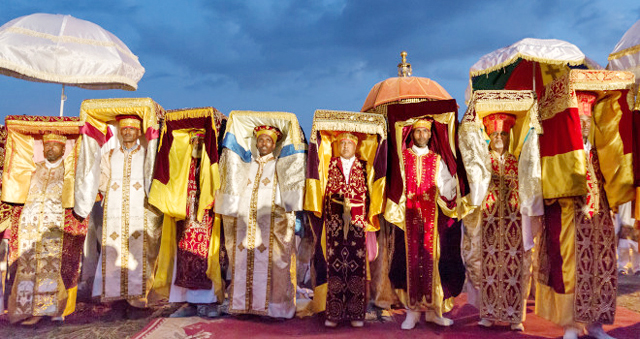 On the celebration day on the 19th of January, many people gather at jal meda in Addis Ababa to watch the ceremonial baptism and worship. This awe-inspiring festival is celebrated in the famous Gondar, Lalibela and in the capital city Addis Ababa. The festival culminates with the priests delivering the final service taking the Tabots back inside the church’s treasures.

After the outdoor festival, the celebration continues with a big feast with traditional special dishes of food and drink including distinctive dishes like doro wet (chicken stew) with boiled eggs, chopped collard greens, kitfo (minced raw beef), tibs (traditionally seasoned and fried meat) and gored gored (cubed raw meat) is often served with spice and ayibe (crumble cheese) as a side dish to ease the spicy food. The festivity and outdoor celebration continues until 20th of January.

Author Eden Sahle can be reached at eden.sahle@jumia.com