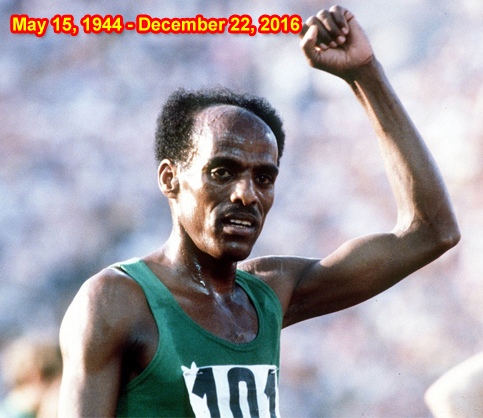 Miruts Yifter, one of the greatest Ethiopian athletes of all times, has passed away today at the age of 72.

A hospital nurse confirmed his death to Ethiosports by phone.

Yifter has been hospitalized in Toronto, Canada for months suffering from a collapsed lung.

He was born in Adigrat, in the Tigray Region of Ethiopia, His date of birth is often given as May 15, 1944, though there is some uncertainty about this.

Miruts’ outstanding performance at the 1980 Moscow Olympic Games where he won gold medals in both 5,000m and 10,000m races helped open the floodgate for subsequent Ethiopian athletes, including the king himself, Haile Gebrselassie.

Miruts Yifter spent early parts of his youth working in different factories and as a carriage driver. His talent as a long-distance runner was noticed when he joined the Ethiopian Air Force.

Yifter made his Olympic début at the Munich Olympics where he won a bronze medal in the 10,000 metres and also qualified for the 5K final, but arrived too late to the stadium and missed the race. He was unable to participate at the 1976 Olympics because his nation boycotted but, four years later in Moscow, Yifter made up for his disappointments. In the final of the 10,000 he sprinted into the lead 300 metres from the finish and won by ten metres. Five days later, in the 5,000 final, Yifter was boxed in during the last lap. With 300 metres to go, however, his Ethiopian teammate [Mohamed Kedir] stepped aside and Yifter again sprinted to victory.

In addition to his Olympic medals, Yifter won 10K gold and 5K silver at the 1973 All-African Games and won both the 5 and 10K at the inaugural African Championships in 1979. Yifter continued to compete into the early 1980s, running on Ethiopia’s gold medal winning team at the 1982 and 1983 International Cross-Country Championships, and in the 1990s he emigrated to Canada, where he worked as an athletics coach.

14 thoughts on “Miruts Yifter, Ethiopia’s greatest athlete passes away at 72”