Cairo, 12 June 2015. The Confédération Africaine de Football and SPORTFIVE have renewed the landmark agreement for the marketing of media and marketing rights of major competitions organised by CAF for a 12-year term (2017-2028). 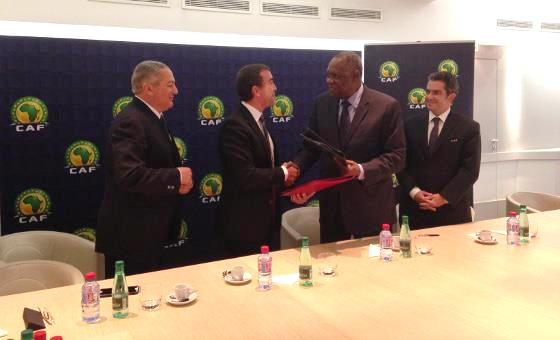 While renewing its confidence in SPORTFIVE for the marketing of media rights and marketing rights of its major competitions until 2028, for a guaranteed minimum of one billion US dollars (USD 1.000.000.000), the Confédération Africaine de Football (CAF) is enabling African football to face the future with a minimum of serenity.

Compared to the previous agreement, the guaranteed minimum of one billion US dollars represents a very substantial increase.

The competitions covered by this agreement are:

–       The African Cup of Nations and its preliminary phase

–       The African Nations Championship and its preliminary phase

This new partnership will enable CAF to pursue its objectives in developing, promoting an increase broadcast of African football. It equally guarantees an efficient organisation of competitions on the continent, a more effective protection of the integrity of players, the game, competitions, and the taking of significant actions to the benefit of the African youth within the context of football.

“We have appreciated and are very satisfied with SPORTFIVE performance over the years. We are excited to expand this agreement for 12 additional years and to jointly continue to cooperate in the future to promote our sport”, CAF President, Issa Hayatou, said.

Moreover, the partnership falls in line with CAF’s willingness to meet the needs of member associations and their national teams, as well as clubs, an exposure of the highest level, especially in terms of audio-visual coverage and digital activation.

The partnership also aims at enabling CAF competitions and African football in general to spread as widely as possible, while substantially increasing the revenues of its member associations. Less privileged nations will have the opportunity to get onto the international scene, which will grant their national teams and clubs the best possible exposure.

“This historic agreement will consolidate the professionalization of African football and will accelerate the establishment of key development programmes for African teams and technical staff, in order to have the best performance of African teams at the global level”, the Secretary General of CAF, Hicham El Amrani, clarified.

The Confédération Africaine de Football (CAF) is an international non-governmental organization and the football governing body in Africa. It is currently running 11 competitions amongst which the African Cup of Nations (CAN) and the African Nations Championship (CHAN). CAF was founded in 1957. It has a membership of 54 National Associations. The headquarters is located in Cairo, Egypt. For more information: www.cafonline.com