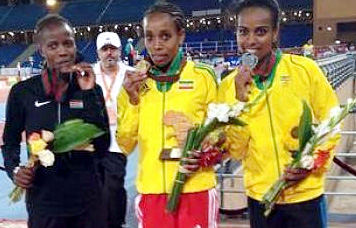 Marrakech, Morocco – One of the biggest shocks so far at the African Championships came in the women’s 5000m.

It was also one of the most highly anticipated events as world indoor 3000m champion Genzebe Dibaba (Ethiopia) was up against world silver medalist and Commonwealth champion Mercy Cherono (Kenya) and world bronze medalist Almaz Ayana (Ethiopia).

Ultimately there was no contest, but it was perhaps the least favoured of that trio who came away the victor.

Ayana finished almost 10 seconds ahead of Dibaba, winning in 15:32.72 to take eight seconds off the championship record. Meanwhile, Cherono was a well-beaten fifth in 16:08.81, the third of the trio of Kenyans to cross the line. Janet Kisa took the bronze medal in 15:54.05 ahead of Margaret Wangare.