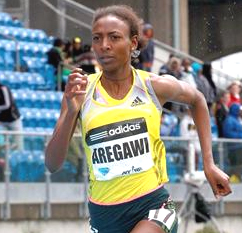 Recently the Prefontaine Classic was proud to announce their best ever field for the iconic Bowerman mile. Organisers of theÂ IAAF Diamond LeagueÂ meeting in Eugene have now matched it with their â€˜best everâ€™ field in the womenâ€™s 1500m on May 31.

The landmark 40th Pre Classic will be held at the historic Hayward Field. The womenâ€™s 1500m is filled with gold medallists and Diamond Trophy winners â€“ some runners even have bothâ€” and every entrant has made an Olympic or world final in some event.

Last year she also won the IAAF Diamond Trophy after ending the season undefeated in her specialist event. The Swede has the fastest personal best in the field at 3:56.54.

USAâ€™s Jenny Simpson won gold at the 2011 World Championships and claimed silver in Moscow last year behind Aregawi. The 27-year-old is one of few women to have run the 1500m faster than four minutes at Hayward Field.